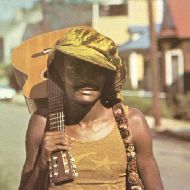 My friend and I got talking about Marvin and the way in which he’d dragged Motown into a bolder, more confrontational future. I casually mentioned to him that I’d always preferred ‘73’s Let’s Get It On’s timeless sexuality to ‘71’s funkier, grittier, more political What’s Going On? I told him this and there was a tense silence. He turned pale, looked at me, coughed, mumbled ‘have you never HEARD Inner City Blues?’, shuffled in his chair, finally made his apologies and left . . . That night I alternated between What’s Going On and Let’s Get It On, immersed myself in them, felt them each, in different ways, communicate everything that music is supposed to communicate, realised that I’d spent a lifetime dismissing a fine, fine album and wondered why . . .

What’s Going On’s blunt directness, its no-punches-pulled despair and rage enveloped in deceptively-soft funk,  in jazz and in pop-soul classicism, felt oddly naive and faintly angsty-adolescent,  I think, when I- an oddly naive and faintly angsty-adolescent white kid in the North London suburbs- first listened to it seven years after its release. Its musical and lyrical message seemed so of its time and place, so stuck in black struggle there and then that there was an alienating distance in listening to it now and here, in these new, exciting, ‘radical’, three-chord years of punk rock and white art-school rebellion. Let’s Get It On’s dark, seductive, sensual threat/regret had made it (almost despite myself) one of my favourite albums but I- criminally- paid little attention to What’s Going On from that day to this.

I really didn’t have a fucking clue. Gaye may have been- in some ways- already divorced from black street reality when he recorded What’s Going On but he sang and played on that album with a pained authenticity and a passion and a contained explosion of both the particular and the universal that laid waste all bar one or two of the spiky white boys with guitars I was listening to (and all bar three or four musicians who have recorded anything, ever).  And that night a couple of weeks ago I finally got the message.

Which brings us (finally) back to Lou Bond. The third time I listened to it was the day after my night in with Marvin:

Unengaging on those first couple of listens, the first song here- To The Establishment (sampled recently by OutKast)- was idiosyncratic still, but seemed harsher, its truth unashamed and all the better for that. Fuck-you in attitude, gentle, massive, long:  strings, bass, horns, an at-times extraordinary voice, lyrics of empathy and rage (‘if I had my way, I’d put you all in the electric chair’) and production of glorious excess. It had now become crushing in its eleven minutes of intensity, its determination to be, express, use the voice, use sound itself as instrument of connection and alienation.  Still (like the rest of the album) oddly asexual, it was sporadically visceral and moving nevertheless.

As strings swamped the next track- the almost-poppy, very different  Lucky Me– I felt a little closer to him, warmer, as Bond rejoiced (ironically?) in the end of a relationship with a clumsy lyrical ambiguity that continued into the more enticing That’s The Way It Should Always Be.  Part whispered, part spoken-word, intimate yet oddly objective, here he pondered a (different?) relationship, ambivalent about marriage and settling down, offering beguiling glimpses of doubt and heart. A warped, more serious and intense relative of some of those end-of-disco slow-dance ballads by Earth, Wind and Fire, Kool and the Gang, Heatwave, it was- as a whole- decent, goodish, half-magical, but, like the later work of those bands, a mile away from where it’d come from, both musically and culturally.

As with the two previous plays, the nadir of the album was reached this time round with Let Me Into Your Life: half-formed, floating with fragments of a dozen decent songs, a dozen decent voices which come and go and are quickly forgotten, it still seemed pointless, self-indulgent, tiring. Come On Snob, though (‘please get your nose out the air’) forcefully grabbed my attention back this time as it meandered jazzily, proggily, intricately, its power more subtle than was originally apparent. The closing Why Must Our Eyes Always Be Turned Backwards? was both soul-sweet and (again) the most-challenging song here in its superficially-naive sincerity:  its listing of the world’s troubles- Vietnam, India and Pakistan,  world hunger,  unemployment, the Holy Land, ‘fussin’ about the busin’’, Northern Ireland, pollution (you can’t help but hear Eve of Destruction) – sees Lou struggling to cope with evil, wandering, searching, heart-on-sleeve, trying to marry the personal and the political. It ain’t Marvin but it would never have existed without him and his spirit weaves around it.

So they were still here the third time round, Isaac’s orchestrations and Marvin’s social consciousness, albeit in even more distorted form, their visions on occasion more clearly filtered through the prism of white rock and West Coast singer-songwriters- and my discovery of the splendour of What’s Going On. When the album worked, the white-black alchemy of classic Stax or Sly and the Family Stone was evident, stark; when it didn’t, I found myself wishing Bond would take Marvin’s What’s Going On lead and see things in racial terms- be harder, more uncompromising or- instead- head down the snaking, sexual, sensual path of Let’s Get It On. But what was previously embarrassing had now revealed itself as far more than that: over-direct, perhaps, sporadically intellectually and emotionally lazy, maybe, but real and hard and undeserving of the conceit and haughty condescension of a white English bloke in 2010.

There’s strength and focus here: that’s undeniable. There’s class and soul. It’s self-conscious at times, utterly unselfconscious at others. It’s over-aware of Marvin and sometimes misses the point.  It reaches back, every now and then, to Stax and Motown greatness. Where it fails, it fails dramatically, usually by (consciously/unconsciously) connecting to the spirit of white rock nonsense, to that earlier rebellion of white America, or to the one over here a few years later.

You’ll probably love it and hate it. Give it a listen. If you can bring yourself to take advice from someone who never really liked What’s Going On, that is . . .