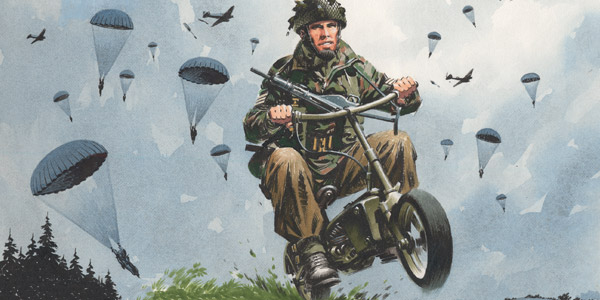 He just appeared out of nowhere one summer. I was staying at my grandparents’ house and, a week or so after getting there, I went to bed as usual, nothing on the locker next to me except The Tottenham Hotspur Football Annual 1969 and a yellow beaker of lemonade. In the morning, there he was: a pinkish, brownish figure standing proudly on top of the book, attached with thin yellow twine, glue and optimism to a rainbow-coloured, crumpled plastic sheet. I stared at the little bloke for a few seconds, then picked him up, knocking my beaker over in the process and, ignoring the E numbers spreading stickily across the table, I turned him over in my hand, examined him carefully, started to smile. Cool. Really cool. Really, really cool. He was a red-capped, sly-grinned, Omar Sharif-moustached, camouflage-clothed, smaller-and-not-quite-as-camp Action Man, sub-machine gun slung jauntily over his shoulders, his garish, slightly poncey parachute roughly the same size and colour as the monogrammed handkerchief my parents had got me for Christmas and which I’d skilfully managed to hide under my bed at home. Mostly cool.  I walked over to the bedroom window, looked out over rooftops and greenhouses and sheds and trees, wondered, opened the window wide, wondered again, pulled my arm back and launched my new mate like a javelin in the general direction of Essex. My heart pumped furiously as he did two balletic somersaults in the air before floating for a split-second towards the canal, then detaching himself from his strings and his ‘chute and hurtling downwards, his brief bid for freedom and glory ending ignominiously over the garden-fence as he landed on next-door’s lawn and was promptly torn to pieces by Mrs Sharp’s Old English Sheepdog, the smiling, lolloping, beguilingly-shaggy star of those Dulux adverts you might remember.

And that was that. My grandad knocked on the door a few minutes later, listened and gently wiped my tears away with a Kleenex. He couldn’t quite bring himself to promise me another friend.