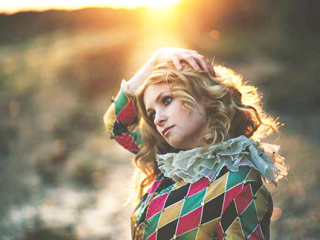 Here is where we start and where we end.

Two young(ish) people, a man and a woman, are wandering through mid-European poppy-full fields, running through haunted forests, hand-in-hand. The woman is strangely-clothed, weird, Celtic and ancient somehow, mumbling then pleading then smiling; the man- a step behind her- seems to be orchestrating her movements, her indistinct, then too-distinct, words, conducting them, surrounding them with waves of unheard sound and washes of quantum energy. They wink at each other, grin, playing like kittens, seeming to be immersing themselves in a world that exists just for them. Snatches of Nick Drake and Air and Tangerine Dream: pianos and acoustic strums and keyboard waves bob and pluck and caress. A dark figure, scythe in hand, wanders across the screen.

Cut to: The interior of a sparkling, whirling Leeds/Paris/Berlin/Gotham club, 70s glam/disco beats pounding and stamping on an arms-waving, bouncing, multi-coloured, lost-and-sexed-and-drugged crowd. The bass-stomping stops, abruptly, replaced by guitarless Human League leaps, which stop, themselves, abruptly, replaced by those same snatches of Drake and Dream and then we hear, rising and rising, drowning out the music altogether, the smash of glass, shouts, screams, pain. Hundreds of young(ish) people spill out of the club onto the dark 3am street, bawling their hate, their disgust, their rejection and hurt, vomiting, crying. We can hear the words ‘hippy shit’ repeating, whirling, echoing. A man spits the phrase ‘fucking Enya’. A girl says ‘acoustic’, sits down on the pavement, deflated. A bouncer pleads with them to go back inside, pleading with words like ‘pastoral’ and ‘ambient’. The crowd mob him, beat him . . .

Cut to: Swanky room full of the besuited good and great of the meejah. The young(ish) man and woman skip up to the rostrum, grab the trophy and the cheque, hold them triumphantly aloft. The camera whirls, fixes on the cheering, madly-clapping audience: we see the bouncer, bandaged but beaming, the kids from the club, ecstatic and satisfied.

By now, you’ll know this is a long, long way from the last one and the one before. Its intentions are more masked, its glamour older and more subtle. This one seems- at first glance- less concerned with rhythm and sex, more focused on sound and romance. It’s more layered and more intimate, less in-your-face and less aggressive. It’s orchestral in places, the soundtrack to some long-forgotten, oblique but entrancing French New Wave film. Psych, synth, sensuality: the dark/light-edged, sexually-predatory, glam-sheened dance-pop spangle of Black Cherry and Supernature has been packed away in its circus container, Alison and Will’s blackened promises and camp glitter replaced by a musical and lyrical intimacy that enfolds and pricks and soothes- for a while. Yet this is no cheap day-return to Felt Mountain: this is a flight to the stars, something familiar, new and special, pained, still, at times, obsessed, still, fundamentally, with pop and trash and glamour and the pointlessness and joy of a doomed world, yet confident enough, always, to make us work before falling in love. There’s no longer any attempt to have every single person in the world love ‘em. There’s still melody and hook and chorus and weirdness, far-away echoes of Bowie and Bolan and Studio 54, still boom of bass and drums, that shared knowledge of all our Pop Histories. But simple pop/folk melody twists and turns- on every track- into something harder to pin down, thicker and meatier, but always hypnotic. It’s fairground and kindergarten and graveyard. It’s 1949 and 2059 and whenever you want it to be.

Moments of magic: the thrill and threat of Monster Love; the 78rpm scratchiness and before-we-were-all-bornness of Eat Yourself; the innocence and compassion of Some People; the sweet, scary and seductive single A&E; the noirish Cologne Cerrone Houdini, the nearly-normal Caravan Girl. Alison’s voice(s) throughout shifts and plays over and with the music: it’s tough and fragile, childlike and supremely adult, her words both direct and oblique, story-telling and picture-painting.

Pretty stunning, then. There are points here- on Clowns and The Road To Somewhere and for a few seconds elsewhere- that do threaten to get a little too close to something nice and relaxing, to, even- in their strangely foreign woodland Englishness- a certain (and I’ll deny ever saying this) Jethro Tullness. But those points are rare and- ultimately- both forgiveable and easily forgotten. This is a beautiful complement to, not a negation of, what’s gone before. Have a listen and watch the films unfold.