I won this album in a competition in the Daily Mirror when I was fourteen years old. I’d never heard of ’em before but the cover (come on, I was fourteen), and the singular, melodic weirdness within, lured me into their web and left me with a lifelong, if slightly embarrassed, love for this most idiosyncratic and uncool of bands . . . 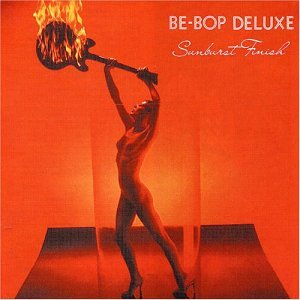 When Bill Nelson played a solo gig at the Bloomsbury a couple of years ago, the biggest cheers were reserved for a bunch of riffy, whimsical, lyrically-strained and oddly melodic songs from the dark days of the mid-Seventies, back when Nelson and Be-Bop Deluxe had been, briefly, BIG. And IN THE CHARTS. Maid In Heaven, Ships In The Night, Crying To The Sky: aching, balding blokes and an alarming number of surely-they-should’ve-known-better younger people sang along for those few minutes like it was a bloody Coldplay concert . . .

Driven, passionate and cerebral, but with a wry sense of the ridiculous, Nelson has been defying and defining his – and everyone else’s – demons through art, photography, literature, film and music for forty-odd years. Since the demise of Be-Bop and his subsequent band, Red Noise, he’s been an astonishingly prolific and questing artist, crossing and jumping genres and media with humour and honesty, frequently influential on, but steadfastly peripheral to, the mainstream. Unsurprisingly, though (and Nelson always seems to have accepted it with dignity and good grace), Be-Bop Deluxe is the part of his life everyone constantly returns to. And, in many ways, everything he (and many others) did before and has done since is distilled in Sunburst Finish.

Thirty-something years on from its original release, listening to the album- the third of five studio LPs the band made between ’74 and ’78 – is a remarkable experience. Though there’s nothing as immediately powerful as the cracked nostalgia of Adventures In A Yorkshire Landscape or the jabbing power-pop of Maid In Heaven from earlier records, there’s loads that’s vital and twisted and satisfyingly out-of-its-time as Nelson sets about creating a self-contained, wrapped world of accessible peculiarity, both aware of and supremely indifferent to the now. Dismissed at the time by Those Who Knew Best as a glam/prog irrelevance (a view given some creedence by punk’s ejaculation into the culture’s consciousness), there’s stuff on Sunburst Finish that helped fuse those genres with post-punk experimentation. Thus, while it bleeds Bowie and Krautrock and music hall and Metropolis-kitsch science fiction and Mott and Queen and pre-bland Roxy, it also points towards PiL and Wire and the Pixies and Flaming Lips.

It’s the melodies and choruses that keep the album from being Prog; it’s the weirdness and dark lyricism that keep it from being Pop; it’s the minor-key, discordant jazziness that keeps it from being Rock. Nelson’s guitar pushes and punches the whole thing along, heading off at full speed towards ’70s masturbatory overkill every now and then but (usually) turning back to embrace the song again, fervent and sharp and seductive. Simon Fox’s able drums, the late Charles Tumahai’s fluid, flexible bass and Andrew Clark’s just-right keyboards give further depth to their boss’s vision, only occasionally (when Nelson’s co-production with John Leckie becomes too cluttered) undermining it. The Anglo-ordinariness of Nelson’s voice makes some of his more over-indulgent lyrics a little more intimate and when those words hit home- rich, sad and lovely haikus of jewels, tears and rain- they really hit home.

‘Hand me my costume, please, won’t you pass me my mask . . .’ There’s a pleasing 19th-Century European sordidness- brothels and absinthe and moonlit alleyways- lurking in the best songs here. Fair Exchange’s stop-start time signatures and self-referential rattling-staccato guitar/keyboard/drum riff drive forward the best track on the album as Nelson’s narrator watches, amused and a little despairing. Beauty Secrets’ low-key acoustic-led soul-dance has him, again, looking a little askance but, this time, with a touched tenderness that drags the listener into his decadent, self-mocking world. Crystal Gazing’s Bowiesque, Brecht/Weilly tale of lost souls in the city snarls at times, then smiles, warmly, leading and misleading.

Crying to The Sky’s homage to Hendrix- yearning gentleness raised high by a restrained, beautiful guitar solo from Nelson- and the XTCish pop of Ships In The Night (Number 23! in the charts! in February 1976) are the album’s most immediate, cuddly moments. But nothing’s ever quite straightforward with Sunburst Finish: just when you think you know where the thing’s going, it screeches to a halt and veers off somewhere else: different times, different places. Blazing Apostle’s catchy pop melody gets dragged around all over the place while its percussive God/Devil imagery – a Yorkshireman’s take on Southern US Gothic – is deepened by the guitar and keyboard strangenesses. Life in the Air Age’s exploration of the alienation of someone from a different planet (Nelson himself?) – ‘I’m old and I could use a friend’ – is spun along breathlessly by Tumahai’s elastic funk and a Soft Machine-jazziness before heading off into taut guitar-solo textures and an insistent semi-chorus.

It’s not perfect, of course: the big, operatic Sleep That Burns is alternately scary and silly, while Like an Old Blues is just irritating- bloodless and gimmicky off-kilter rock’n’roll. 1991’s re-mastering of the album for CD added in three ‘new’ tracks: a studio version of the live favourite Shine, a faux-funk instrumental jam that sounds like some skewed, screwed Style Council; the folky, largely acoustic ballad Blue As a Jewel, rescued from the middle of the road by Nelson’s never-quite-MOR voice and the widdly, wobbly Speed Of The Wind. None really enhances the original album, though each offers more than a glimpse into the Nelson-to-be.

And that, in some ways, is the point. While at times Sunburst Finish is the whitest of white music, the 1976est of 1976 music, at others it’s much, much more. There’s a lot that’s wonderful in and of itself here and there’s a lot that Nelson and those he influenced/was influenced by would build on and take further. The 21st Century would be that small bit different, that small bit diminished, if this album had never been made. Give it a try.