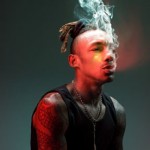 A murderous, mumbling intensity, a deep-drugged disdain; punky, punchy grit and grime, primitive edge and absorbed/absorbing purpose, all shot through with a slamming self-belief: Tricky’s recent on/from-another-planet two-song appearance on Later a few weeks back seemed to offer a guarantee that this was going to be brilliant, a vicious, head-spinning assault of deadly, doomed romance. The album was going to be joy and rage and soul pointed at and pitted against the lazy, the bland, the wear-your-influences-on-your-sleeve-so-no-one-will-notice-your-lack-of-heart rock bands, the New Labour/Coldplay axis of evil, the sponsored festival crap and the dim, dangerous, whiter-than-white, status quo-worshipping ‘Glastonbury’s for guitar bands’ bollocks that’s continually bleaching and rewriting history rather than taking it as inspiration and warning. This was, it seemed, going to do what Tricky and his Nineties Massive mates did way back when: re-charge and re-ignite pop music’s essential to-and-fro Black America-to-white-Britain-and-back-againness, celebrate all the ’50s, ’60s, ’70s, ’80s working-class kids in Liverpool, London and Bristol standing, waiting eagerly at the docks, in clubs and in their angry, lost bedrooms for the latest r’n’b import just so they could copy, distort and build on it before sending it back where it came from with added sneer, a whole load of new textures and clumsy, cocky craftiness . . . END_OF_DOCUMENT_TOKEN_TO_BE_REPLACED